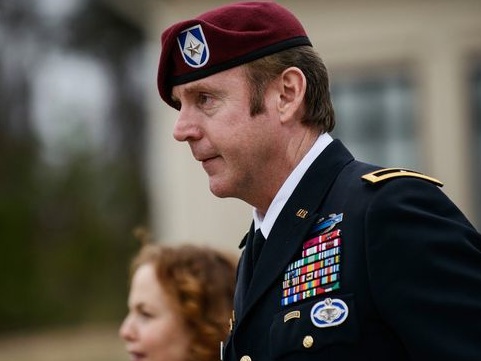 The US Army is just about the best gig serial killers & rapists can get. Those inclined by criminal pathology to such barbarisms will find the army a hospitable venue with complementary impunity from criminal prosecution. That’s due to the court-martial system where the Pentagon tries its own criminals & can rig the system any way it likes. It pretends it’s adversary & defendant at the same time & makes a kangaroo court look like a model of jurisprudence by comparison.

The most recent case in point is the court-martial verdict on hotshot general Jeffrey Sinclair. A female officer & subordinate on his staff in Iraq & Afghanistan accused him of sexual assault (oral sodomy) & of threatening to kill her & her family if she reported him. After two years of proceedings, the felonious charges were dropped when Sinclair pleaded guilty to adultery & sexting with two other subordinates. He walks away from any prison time with a $20,000 fine, a tsk tsk from the military, & can retire early (he’s 51 years-old) with his pension intact.

An unidentified women’s group, legal experts, & members of the US Congress expressed shock at the verdict allowing him to walk away scot-free. What’s to be shocked about in a verdict that was a done deal when the trial began!? One marvels the case even got to a courtroom. Out of the estimated 20,000 sexual assaults in the military per year (that’s a Pentagon statistic so likely massively underestimated), only 575 cases were processed, & only 96 of those went to court-martial. Ninety percent of the assault victims are involuntarily discharged.

Even if the court had sentenced Sinclair to jail time, the Pentagon would find a way to dodge it. When Lt. William Calley was found guilty on March 29, 1971, of the premeditated murder of 22 Vietnamese civilians in the My Lai massacre, he was sentenced to life imprisonment & hard labor at Fort Leavenworth, a maximum security prison. It was a show trial, because a couple days later president Nixon ordered him transferred from Leavenworth to house arrest at a cushy base. He only spent 3-1/2 years of house arrest before being released.

US Army staff sergeant Robert Bales pleaded guilty to murdering 16 Afghan civilians & 6 counts of assault & attempted murder in a March 2012 massacre; he was sentenced to life in prison without the possibility of parole. You can be certain, it’s only a matter of time before he walks free even if they have to drum up a technicality in the trial. The system is rigged & somewhere in those proceedings, someone intentionally screwed up to assure him impunity.

The reason for all these legal intrigues is clear: the US Army fosters psycho-pathology; wars of colonial domination require racism, violence & social hatred of every kind. Charging Sinclair with adultery is mockery since prostitution is an adjunct of the military, often administered by the Pentagon. If soldiers are punished for such conduct, they are less likely to enlist or to follow orders.

Integrating the US military was a major civil rights battle for Blacks, Latinos, & Native Americans during WWII; it became an issue for women in the 1970s. That doesn’t mean antiwar activists should not do everything in our powers to persuade young men & women to turn their backs on military service & instead find something useful to do with their lives.

(Photo of Sinclair leaving courthouse smirking, knowing he & the Pentagon pulled a scam on justice by James Robinson/AP)