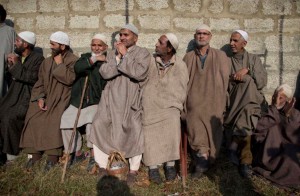 This is an interesting scene–but it sure wasn’t the most interesting thing going on in town that day. These Kashmiri men were watching the funeral procession of thousands of people honoring two Kashmiri activists killed on Friday in a “gun battle” with Indian military forces.

We don’t know much about the two men killed. Irshad Ahmad Sheikh & Adil Hussain Khanday were two local guys who allegedly belonged to a militant anti-occupation group. Thousands of mourners attended the funeral of Sheikh in one village & then rushed to another town for the funeral of Khanday. Anti-occupation & pro-freedom chants were part of the funeral proceedings.

The truth of the matter is we can’t trust Indian officials when they claim the two activists engaged in a shootout. The men were more likely unarmed & shot down in cold blood. There are dozens of these alleged gun fights every year in Kashmir which media says idiotic things to explain. Al Jazeera said of one incident, “Indian soldiers & police received a tip-off that rebels opposed to Indian rule in Kashmir were hiding”–so they went after them & killed them all. The shootouts are often at a house or in a wooded area where Indian police claim they got a surveillance tip that separatists are hiding out–so they go & shoot the place up & kill everybody. What happened to due process? What about the right to oppose Indian rule without being assassinated? Do the people of Kashmir not have a single right? No they don’t.

According to two Kashmiri human rights groups, Indian military personnel are responsible for 1,080 extrajudicial killings, numerous cases of torture, sexual assault, & disappearances–just in a four-year period. The groups are asking the Indian government & UN to investigate over 1,000 cases of abuse by the Indian army which operates in Kashmir with “institutional impunity” because they are protected from prosecution by an emergency law in force since 1990. That law allows Indian military & paramilitary forces to raid homes & kill on suspicion of illegal actions.

Our fullest solidarity with the people of Kashmir. End the Indian occupation.

May the two Kashmiri freedom fighters Rest in Peace.