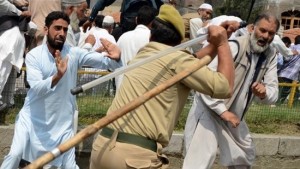 In preparing a post about the recent murder of two Kashmiri activists against the brutal Indian occupation, I came across this photo from August 23rd of this year. It was captioned “Indian police clash with Kashmiris during a protest in Srinagar.”

“Clash” is the media buzzword used against Palestinians & Kashmiris for confrontations involving unarmed civilians & heavily armed military forces. Is it nitpicking language to say “clash” suggests a reciprocity of force when there is none? In any reasonable description of this scene, it would be called an assault, not to mention a human rights crime.

Our fullest solidarity with the independence struggle of Kashmiris. End the Indian occupation!