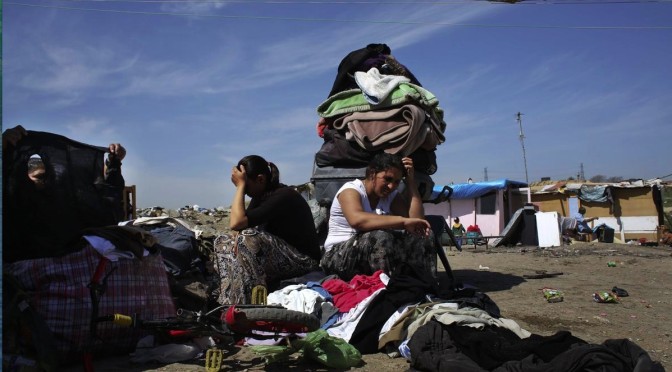 City officials of Madrid, Spain must have taken sensitivity training since they waited till the day after UN-designated International Roma Day on April 8th to evict & raze the homes of Roma residents in the shanty settlement of El Gallinero on the outskirts of Madrid. Madrid’s urban planners have designs on the property & apparently got an obliging judiciary to issue a court order for eviction.

This isn’t the first time city bulldozers had a go at the settlement. Last June, cops surrounded the area & moved demolition crews in; several homes were destroyed & 34 people were left homeless. Soon after the cops & bulldozers left, residents started building new shanties since they have no place else to go. The government claims it offered one-way tickets to residents to return to their own countries. What these bureaucrats need to get through their thick skulls is that Spain is their country–even though discrimination means the poverty rate in El Gallinero is 93%.

El Gallinero is a settlement of cardboard & tin huts without running water or sewage in an area prone to flooding. Residents survive, just barely, by selling scrap metal & begging.

Since April 8th was International Roma Day, we ought to remind Madrid officials that an estimated two million Roma were killed by Germany’s Third Reich; that up until 1980 Roma women were force sterilized in Czechoslovakia to stop Roma from “breeding”; that Norway only stopped sterilization of Roma in 1977; that Roma are persecuted, segregated, thrown out of settlements in several European countries, & forcibly deported–most notoriously & ruthlessly in France by the so-called socialist government.

But Madrid officials know all that. They not only want Roma settlements for gentrification schemes but they want to use Roma, as they use undocumented immigrants, to scapegoat for the neoliberal policies reducing the rest of the populations in those countries to penurious austerity.