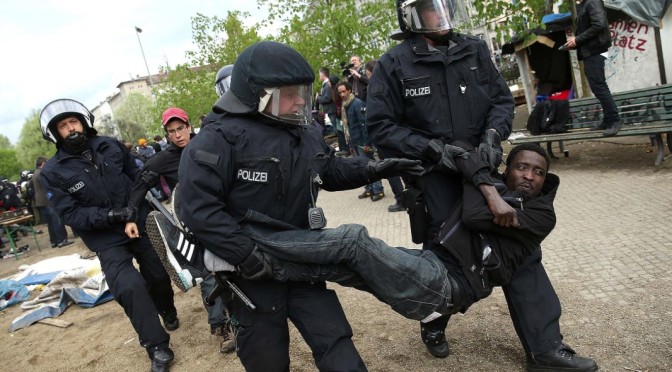 The remarkable 1974 German film titled, “Ali: Fear Eats the Soul,” by Rainer Werner Fassbinder
is about a young Moroccan immigrant who meets a dowdy middle-aged cleaning woman when he is taunted into asking her to dance in a bar where she has sought refuge from rain. The signature moment in the film is when his ridicule melts into nothingness as she asks him about himself & the humanity of both merges. The rest of the film is taken up with the ferocious discrimination they faced as a couple–not primarily due to their age difference but to his nationality.

It was evident from that film that racism against immigrants was rampant in Germany even before immigration became a central issue in US politics. There certainly is no glory in outpacing the US on that question but a considerable amount of shame. There are now an estimated one million African immigrants in Germany, distinguished as either North African or Sub-Saharan, which is code describing either Arabic or Black ethnicity. Some immigration agencies estimate there are now between 7 & 8 million undocumented African immigrants living throughout the European Union (EU) countries–at least two-thirds of them from North Africa since EU immigration policy toward Black Africans is so violent, attempting to keep them isolated in squalid refugee camps on Mediterranean islands or massively deport them.

European regimes are torn on the issue of immigration in the same way as the US regime. On the one hand, these countries rely on the cheap, exploitable labor of foreign workers for any number of jobs–& “illegal” status makes them super-exploitable. But on the other hand, whipping up anti-immigrant fervor among working people is a marvelously effective weapon for divide & conquer.

This young immigrant is being dragged away from a confrontation where riot cops in Berlin surrounded & tried to dismantle a makeshift refugee camp. The report says “violence broke out” between refugees who had accepted a deal by the city to leave the camp & move to a renovated hostel & refugees who insisted on staying. The confrontation was likely less between skepticism & credulity about authorities & their promises than it was another instance of ‘violence breaking out’ when riot cops attack protestors.

Immigration is a human right!