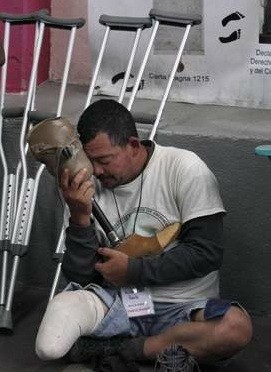 One of the most significant developments in immigration rights in several countries is that immigrants themselves are fed up to their eyeballs with racist injustice & have begun to fight on their own behalf. They are among the toughest people on the planet, given what they have to go through–& their entry into political action is one of the most promising things to come down the pike in a long time.

This 46-year-old Honduran man named Norman Saul Varela is here holding his prosthetic leg. He lost his own limb in 2005 while riding the train called “La bestia de muerta” (“the train of death) through Mexico north toward the US border. Hundreds of Central American immigrants lose limbs, are injured, murdered, assaulted, kidnapped, disappeared, raped, & robbed riding those trains. Many end up in mass graves.

If you want to know why 50,000 Mexican soldiers deployed in the militarization of the country can’t put a stop to this violence, the answer is they are likely involved through paramilitary squads serving as the southern flank of US immigration policy. They’ve certainly proven no use in stopping drug trafficking, which has increased substantially since the massive military deployments.

Senor Varela is in Mexico City to ask the Mexican Senate to stop government persecution of Central Americans & protect them from “criminal gangs”. The Senate legislated a few years ago that it is legal for Central American immigrants to transit Mexico. The problem is they haven’t made it safe. It doesn’t take a genius to recognize that people forced to hop on & off moving trains & ride on top of moving trains are in grave danger. And it doesn’t take a genius or big bucks to provide safe transit–like passenger trains. But the Senate has to call off the military, reign in the paramilitary squads, & stop federal cops from searching buses & trucks traveling north for immigrants. And it has to expel all US military, civilian, & covert operatives from Mexico because the violence against immigrants has the distinct whiff of “la migra” (US border patrol) written all over it.

Our fullest solidarity with Senor Varela & his fellow immigrants. Immigration is a human right! Open the borders!