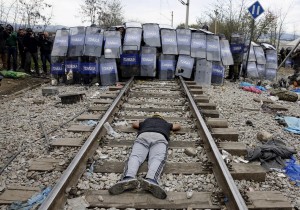 Refugees from Iran, Morocco, Bangladesh, Pakistan, & Palestinians (likely from refugee camps in the war zones) have been protesting for over a week against restrictions debarring them from moving north in Europe–where they can join thousands of Syrian, Afghan, Iraqi refugees locked out on the borders of Hungary, Serbia, Croatia, Slovenia.

The checkpoints on the Macedonia/Greek border now require passports which many refugees may well not have–like thousands of Central American & Mexican refugees entering the US. The xenophobic restrictions were put in place after a forged Syrian passport was found next to the body of one of the attackers in Paris–a story that stinks to high heaven even if you’re not a conspiracy theorist. And of course, it is just the pretext the EU was looking for to justify denying asylum to tens of thousands of people.

There are compelling reasons for the flight of those now denied refugee status. According to a BBC report, the Iranians “appear to be from Iran’s Kurdish minority.” (One wonders why the BBC reporter didn’t simply ask them.) But Kurds are a persecuted minority in Iran. Under international law that means they have rights to demand asylum.

Morocco, Bangladesh, & Pakistan are all up to their eyeballs in sweatshop economics, with workers earning chicken feed, treated like slaves, & unable to support families. If the EU doesn’t want refugees from sweatshop countries, it can damn well stop using them as slaves. In addition, tens of thousands have been displaced by massive flooding & years of US bombing in Pakistan. Palestinians, of course, have long been displaced by Israeli ethnic cleansing. All of those nationalities have every right under international law to demand asylum & the EU has every obligation to extend it–with or without a passport.

This photo of an Iranian refugee blocking train tracks in Greece against a phalanx of riot police is worth a thousand condemnations. Those refused entry to Macedonia vow to stay put & continue their protest. We need to render solidarity by demanding the EU open the damn borders.

Immigration is a human right.