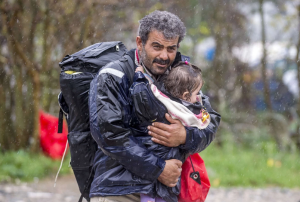 Who will write the history of this era? Who will chronicle the barbarism of wars that drive millions to flee but allows them no place to go? That draws on the sewers of racism to vilify refugees as terrorists hellbent on taking out ‘western civilization’? That parses distinctions between those fleeing war & bombing from those fleeing starvation & destitution? Such is the legacy of neoliberalism, the barbaric phase of capitalism.

This refugee father is trying to protect his tiny child from winter rains after crossing the Macedonian border from Greece. There are thousands of children, elderly, infirm, disabled, people with special needs & rather than provide shelter & transportation, European countries are putting up razor wire fences fortified by phalanxes of riot police & soldiers with assault rifles–against unarmed refugees. What the hell is this world coming to!?

The Greek-Macedonian border has become the first line of defense for European Union (EU) treachery. Army engineers put up fencing, militarized the border, & Macedonia, Serbia, & Croatia are restricting passage to northern Europe to refugees from Syria, Iraq, & Afghanistan. All others, including Iranians, Moroccans, Bangladeshis, Palestinians, & Pakistanis are being turned back as economic immigrants. According to media reports, 1,000 refugees are stuck in Greece with no social services or shelter. The number stuck there is likely much higher. Macedonia is of course not just extemporizing refugee policy. This is a coordinated criminal policy formulated by the EU to keep refugees out of northern Europe.

There are protests on the Macedonian border against the exclusion of certain nationalities–including Iranians who sewed their mouths shut & over a thousand Iranians, Moroccans, & Pakistanis who blocked train tracks to oppose their exclusion from heading north.

Immigration is a damn human right. Open the borders. Hopefully the history of this era will be part of the obituary for neoliberal capitalism which brought nothing but barbarism to human civilization.