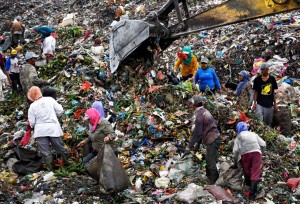 No one knows for sure how many people worldwide subsist off scavenging landfill. One estimate is 15 million just in the “developing world”–a euphemism covering a multitude of colonial crimes against humanity. But millions of people, including children, earn pennies a day picking for recyclables through stinking, fuming, gaseous mountains of decaying food, putrified waste, animal & human poop, toxic medical waste, animal carcasses, toxic chemicals & metals, rodents & roaches.

The majority of these scavengers were impoverished by neoliberal policies, particularly rural land grabs. They survive because under neoliberal capitalist policy, waste management has been privatized, massively neglected, & dumped on “developing” countries or on Indian reservations in the US for the poor to scavenge at peril to their own health & wellbeing.

Adding treachery to wretchedness, it’s now in vogue to ennoble this work. To apologists for the status quo of human misery, nothing stinks under neoliberalism. The World Bank says “waste pickers make a significant economic contribution by saving municipalities money in the management of solid waste.” Scholars & academics struggle with just the right term to call this work that won’t demean & outline the social benefits of scavenging like job creation, public health & sanitation, reducing pollution & mitigating climate change–& above all, municipal savings. Media writes laudatory articles on scavengers building & decorating shanties with scavenged goods. Well-heeled professionals from one NGO after another talk about organizing scavengers into unions & cooperatives.

This kind of ennobling is not just massively patronizing toward the poor but more than anything represents reconciliation with the status quo of growing inequality & impoverishment. Why the hell should poor people have to pick through other people’s poop to earn a living? Why should their & their children’s health be compromised & their lives shortened? Why should they have to endure respiratory & skin infections & numerous health problems because governments don’t want to pay for waste management & don’t give a damn about dignified job creation?

This ennobling of scavenging crap is of a piece with ennobling prostitution as just another way to earn a living when it remains what it has always been–the sexual exploitation of women & children. It is also of a piece with attempts to legitimize child labor by organizing kids into unions rather than working tirelessly to eradicate it & get kids in school & on playgrounds. It represents nothing less than a conservative, reactionary attempt to legitimize exploitation.

No one objects to impoverished, exploited workers forming leagues to protect themselves but most of these initiatives come from people not engaged in these dangerous forms of work but in attempts to normalize degradation & accept neoliberal policies. They’re either stupid or in league with neoliberal agencies like the World Bank, not with the forces of human emancipation.

Scavenging, prostitution, child labor are scourges on humanity. There is no way to ennoble or justify them. If your highest vision of human freedom is unionizing all that, you may be sniffing too many toxic fumes emitted by neoliberal apologists. For sure, you are on the wrong side of human justice & the fight for equality.

This is a rubbish dump near Sumatra, Indonesia in a region where mostly immigrant labor lives.