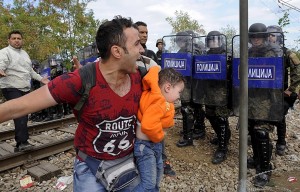 And so the EU/Frontex crackdown on refugees coming through Greece has begun full-force–not only with aggression against refugees on the island of Kos but now on the Macedonian border with Greece. Macedonia is not an EU member state but the EU has joint operation agreements with non-member states involving Europol & Frontex to police the borders.

Macedonian authorities declared a state of emergency & deployed riot police & the army in armored vehicles rolling out razor-wire fencing to seal the border with Greece. Witnesses reported they used tear gas & stun grenades to drive refugees, including small children & elderly, back into Greece. According to some refugees in the border assault, families got split up with some being driven back into Greece & others managing to break the military cordon & enter Macedonia.

Those refugees who make it through Macedonia pass through Serbia & still face the razor-wire fence on the Serbia-Hungary border which Hungary is racing to construct. Since most of the refugees move quickly through Macedonia to get further north into Europe, they are not a social service burden on the regime–though fortuitously the crisis does deflect attention from the political crisis facing the Macedonian regime over allegations of corruption, illegal surveillance & repression.The primary reason for the crackdown is not however the regime crisis but EU policies & the EU joint operation agreement with Macedonia.

We’re glad to hear UN refugee agencies find the situation deplorable but wish they would move beyond their usual hand-wringing to condemnations of the EU & Frontex & demand Macedonia remove its troops & re-open the border. One UN official said Greece estimated between 3,000 & 4,000 refugees are stuck in a no-man’s land at the border without access to medical & humanitarian services. That will only increase as the crackdown continues & there is a major human rights crisis to deal with. Human rights crises exist on every major immigration route in the world only because political regimes deny human beings the ancient right of asylum from war, occupation, poverty.

This photo is one incident today of a refugee & his frightened child running from riot police firing stun grenades to disperse them. The barbarism against them will only increase without worldwide expressions of outrage.