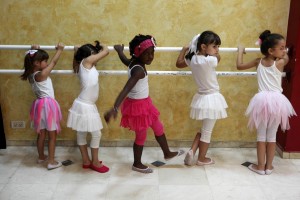 Now isn’t this a reason to build the economic, cultural, & academic boycott of Israel (BDS)!? These little girls are taking ballet lessons at the Qattan Institute, an educational & cultural center in Gaza City.

One Zionist publication expressed alarm that young women in Gaza are being militarily trained–while US media has been boasting for three days that two women just completed military training with the Rangers, the special operations unit in the US army. The difference is Gaza is under military siege without any defense & no country in their right mind would attack the US because its anti-missile system is Israel’s Iron Dome system writ large.

Who wants children to grow up in a world of military fortresses & anti-missile systems? The creativity of children in music, art, poetry, dance is the future of humanity–not obstacle courses & weapons training. But meanwhile, Gaza is under military siege & young women want to participate in its defense so their children & younger sisters can dance.