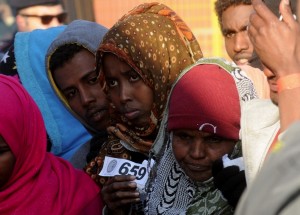 The European Union’s (EU) racist immigration policies have created an extreme humanitarian crisis on the Mediterranean Sea. Last Sunday, another boat of African immigrants that set off from Libya capsized & 400 people, including children, drowned. Only about 150 were rescued by the Italian Coast Guard. The Italian Coast Guard claims it “intercepted” 42 boats between last Friday & Monday, rescuing 8,500 immigrants. Photos show infants, seniors, pregnant women being rescued; they also show immigrant’s bodies washing up on Italian beaches.

Since the 2011 US-NATO “emancipation” from Muammar Gaddafi, the Libyan government has become unstable & the country increasingly violent & chaotic. In such a situation, immigration networks have been able to operate more freely. Frontex (the EU agency that coordinates defense of Europe’s borders against refugees) reported there are at least 500,000 more immigrants in Libya awaiting transport to Europe. That’s not counting refugees from Syria, Iraq, Eritrea, Afghanistan, & elsewhere embarking at other points. How does Frontex know that? Because it operates a multi-million dollar high tech, sci-fi surveillance program using live satellite imagery, drone surveillance for close-ups, & radar to collect information along the immigration routes & it gathers data from Spanish, Italian, & Greek coast guard.

If Frontex has such a surveillance capacity, why do the number of boat capsizes & immigrant deaths continue to increase? Cause they don’t give a rat’s ass. In a telling omission, Frontex doesn’t record the number of those who’ve drowned in the Mediterranean but a consortium of European journalists reported that 23,000 had drowned between 1999 & 2013. Staggering–& evidence that should be used in a prosecution of Frontex & the EU for criminal neglect & mass murder.

Frontex (i.e., the EU) does not see it’s role as search & rescue but as interception. They are an agency to apprehend refugees & deport them back to their home countries. Between October 2013 & 2014, the Italian government ran Mare Nostrum, a search & rescue operation that ran from the Italian coast right up to the coast of Libya. It was hardly a model rescue operation since Lampedusa fishermen who helped rescue drowning immigrants last October reported the coast guard was negligent & delayed in response. But Italy ended operation Mare Nostrum last October & Frontex operation Triton took over. The Italian navy said it would still respond to any distress call but would no longer proactively search for boats in trouble. Of course maritime law requires even private ships to rescue any boat in need of help so this is no big largesse from Italy.

Rather than replicating operation Mare Nostrum, Frontex will not patrol international waters between Italy & North Africa but will only operate within 30 miles of the Italian coast. More importantly, in violation of maritime law, they do not see their mission as search & rescue but as border control & surveillance. Just when the demand increases for search & rescue in the Mediterranean, Triton, a joint force of European countries, will operate on a third of the budget of Mare Nostrum (cut from a budget of 9 million euro per month to 3 million per month), using only seven boats, two planes, & one helicopter. That rises to the level of human rights criminality. But Frontex hasn’t money to spare for leasing boats because it’s chartering planes to deport refugees back to their own countries.

On Friday, Medecins Sans Frontieres (Doctors Without borders) announced it would operate search & rescue boats in the Mediterranean between May & October. It’s a drop in the bucket compared to what’s needed.

Immigration is a human right! Granting asylum to refugees is an ancient humanitarian practice the EU thinks it can thumb its nose at. Abolish Frontex! Dump the EU! Open the damn borders!
Photo is of rescued immigrants; the young woman is holding a number tag issued by the Italian police after disembarking from an Italian coast guard ship in Palermo.