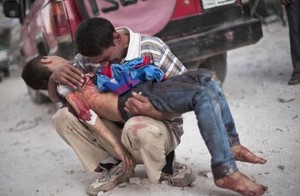 We grieve the death of 8-year-old Martin Richard, whose 6-year-old sister lost her leg & whose mother suffered a brain injury from the Boston bomb. The violence of little Martin’s death exposes the horrors millions of children in war zones endure in a way the US media detaches us from in order to make us indifferent. But the loss of this little boy is a tragedy & a crime not diminished by comparison to the suffering of millions of children in Iraq, Afghanistan, Somalia, Pakistan, Yemen, DR Congo, Palestine, Bahrain, & so many other countries at the hands of US military aggression & global plunder.

Facing the horrors of this child’s death drives home the political imperative of protesting against US wars & of demanding the end of drone bombing of civilians. Children’s lives are more precious that the gold & oil & diamonds they are fought over. They are among the first victims of war & the primary reason for changing the world to make it suitable for them to live & love in. The US government will use Martin’s death to promote more war & less freedom. We must respond demanding no war & more freedom!

Here a Syrian man weeps while holding the body of his son, killed by the Syrian Army in Aleppo, Syria (October 2012). The photo is one among several by an Associated Press team who just won a 2013 Pulitzer Prize for photojournalism.