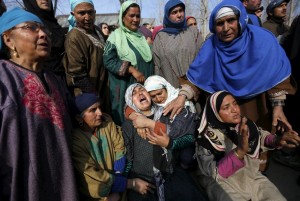 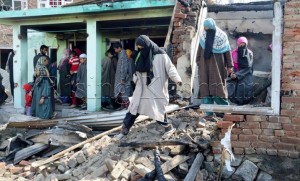 Media coverage of the Indian occupation of Kashmir borrows on the bad journalistic habits & treachery of its usual coverage of Palestinian Intifada. There’s no real investigation or reporting but just a template repeated to pretend they’re reporting news when they’re peddling a particular version of events–the version called propaganda. Whenever there’s another execution of Kashmiri activists, they just plug in new names to a rehash. The problem is, the young people being hunted down & murdered are real people, not mannequins, not props in a narrative.

The template is sketchy & short on details: early this morning, three young men called “suspected militants” or “insurgents” were killed in a “gun battle” with Indian soldiers. (The Indian army involved in the shootouts is always the quoted authority–just like when Palestinians are shot dead by Israeli soldiers.) So according to these military officials, they launched a cordon & search operation in the Dadsara area of Tral last night after getting a tipoff “about the presence of militants.” The three men were shot dead when they tried to break through the cordon. Three AK-47 rifles were later recovered from the scene of the “gun battle.”

Now what is wrong with that story? What makes it smell like horse manure? Other than it’s exactly the same story told every time a Kashmiri activist is killed in an “encounter” with Indian soldiers? We can begin with the rule of law. Since when do soldiers move into an area, set up cordons, & start shooting on the basis of a tipoff? They were, according to the template, going after unidentified “militants.” Does an occupying army have exemptions from international law to stage a massacre on the basis of so little information? To start shooting when they don’t even know who they’re shooting at?

But of course, the template is a lie. Because of the 700,000 Indian military & paramilitary deployed in Kashmir, it is reported 100,000 of them are engaged in surveillance. It is one of the most surveilled places on the planet. That doesn’t mean they knew the three men they killed were guilty of any crime, including having AK-47s. But even if they were armed to the teeth, the criminals are not those who resist occupation (even if in a misguided way); the criminals are the occupiers.

The three men shot dead were Ashiq Hussain Bhat, Mohammad Isaq Parray & Asif Ahmed Mir. The top photo is the funeral of Ashiq Hussain, attended by thousands. (The Guardian-UK betrays its bias when it identifies the funeral location as Charsoo, India rather than Charsoo, Kashmir.) May our three brothers Rest In Peace.

The bottom photo from the FB wall of Rising Kashmir is described as the house in which the three deceased men “were holed up” & showing the damage of the gun battle. It looks like the Indian military took torpedoes after it while, according to Indian military officials, the three men only had AK-47s. That could be documentation of human rights crimes.