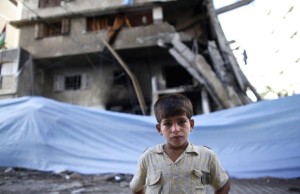 The tarpaulin behind this little guy is hiding the rubble of a building destroyed by Israeli bombers. Part of the Israeli embargo of Gaza includes building materials of all kinds, including cement. So rebuilding hundreds, probably thousands, of homes, buildings, & infrastructure bombed by Israel is a monumental project.

But where do they go when Israel has taken out their homes? Media keeps reporting about an abandoned school house without a stick of furniture that the UN is using to house the displaced. All 15,000 plus of them? Let’s get real!

The most horrifying damage of course are those killed & injured–injuries that mangle small children & adults alike–& the psychic scars in survivors, especially children who have no where to cower from tonnage of explosives & see loved ones & neighbors die.

Elie Weisel, the holocaust survivor & Zionist ideologue, has made a career for himself describing the psychological horrors endured & he wrote “I swore never to be silent whenever & wherever human beings endure suffering & humiliation. We must always take sides. Neutrality helps the oppressor, never the victim. Silence encourages the tormentor, never the tormented.” Oh so true! So why is Weisel mute on the genocide in Gaza? Was that just self-serving melodrama? Is he so corrupted by Zionist racism that he does not recognize the slaughter of Palestinians as genocide?

It’s hard to read the face of this little guy; his emotions must include horror, grief, terror–& resistance. It’s too much to ask the children of Gaza to stand alone when they should be playing soccer, flying kites, & singing silly songs. They make our protests all the more important. Weisel may be blowing smoke but he’s absolutely right: this is the time to take sides & join the international chorus demanding “Stop the massacre in Gaza!”