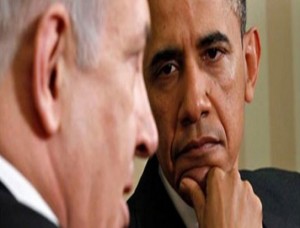 Enough with the melodrama about the strained relationship between Netanpsycho & Obama! To reduce the politics of Israeli apartheid & ethnic cleansing to a personality conflict is worse than banal. It’s political deceit.

It is possible the US objects to rhetorical excesses from Netanpsycho opposing the bantustate solution in Palestine & making it clear Israel wants all of Palestine–not because they disagree with Israel’s plans for the West Bank & Gaza, but because US neoliberal capitalism has long-term plans for Israel in the Middle East that Zionist irrationality & incitement threaten.

Israeli apartheid & ethnic cleansing of Palestinians is US policy. The two countries are in cahoots & complete agreement. And the way we know that is because the entire Zionist assault on Palestinians would collapse without massive military & financial backing from the US. Is Obama squeamish about carpet bombing Gaza? After Iraq, Afghanistan, Pakistan, Somalia, Yemen, Libya, that’s almost a stupid question. And the answer is, not in the least–or he wouldn’t have given millions more in military aid to Israel to carry out Operation Ethnic Cleansing last summer. Does he object to Israeli settlements in the West Bank? Not for a moment, because if he did he would cut off US funding to build them & for the Israeli occupation to make sure they get built. And he’d stop paying for settlers to move there. It’s the old “follow the money” thing. Or more aptly, follow the bombers & the tanks.

Israel is part of the US military phalanx in the Middle East & Netanpsycho understands that very well. He can blow smoke out his ass but the US will not cut the money or weapons flow. So he can blow hot but it’s just the neoliberal version of “good cop/bad cop.” Because in the end, what the US & Israel both want is the destruction of Palestine & the establishment of Israel as a military encampment. And in that regard, not just Palestinians now but Israeli Jews later are only the sacrificial lambs of neoliberal predation.

The most imperative historic mission is to build the hell out of the economic & cultural boycott of Israel & to demand no aid of any kind of Israel.

(Photo of the two schnooks from archives)