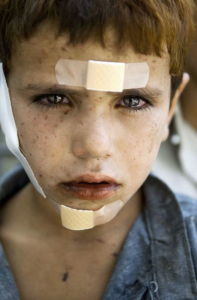 This investigation was originally done in February 2015. It’s a bit lengthy but it is about how embedding journalists up the ass of the US military completely falsifies the narrative about US wars. I’m reposting it to remind us of how that media/military collaboration functions to deceive but also because there has been a complete lack of reporting about the war in Afghanistan (which also involves Pakistan) as we approach the 15th year of US occupation, bombing, & massive war crimes against the peoples of Afghanistan & Pakistan.
***************
This haunting photo is 7-year-old Khalid after his shrapnel wounds were treated by US army medics in the Korengal Valley in northeastern Afghanistan. It was taken in 2007 by Lynsey Addario, then a NY Times photojournalist, but first published in her recent memoir “It’s What I Do: A Photographer’s Life of Love & War” where she describes its unsavory political history & the role of media in covering for US war crimes.

Korengal Valley is a sliver of mountainous terrain only six-miles long & a half-mile wide but for the duration of the war it has been a focus of intense US-NATO land & aerial assault because it borders the area of Pakistan where US drones & the Pakistani air force have been attempting to bomb out the Taliban. An estimated one-fifth of all combat in Afghanistan occurs in Korengal & 70% of US-NATO bombs are dropped in the area.

Addario was assigned along with writer Elizabeth Rubin to cover the area for the NY Times Magazine in 2007 at the same time British photojournalist Tim Hetherington & writer Sebastian Junger were assigned there by Vanity Fair magazine. Both teams were embedded with US troops.

The NY Times team went there originally to report the affects of massive bombing on civilians, including what Rubin referred to as “collateral damage.” (When you start talking the language of the military you might consider un-embedding your head from the Pentagon’s ass.) The article shifted from less about civilian deaths to a profile of Captain Dan Kearney, in charge of a US platoon. On a followup trip, Rubin’s video documentation primarily follows Kearney (referred to by Rubin as Dan) & his platoon as they try to take out the Taliban.

Originally, the NY Times Magazine was going to publish this photo of Khalid with Rubin’s article. But just days before publication, fact checkers at the NY Times asked for evidence the injuries were caused by bombing shrapnel. Since the story had shifted from civilian deaths to hunting the Taliban & glorifying Kearney, the photo wasn’t so relevant anymore but this was one of the few photos of civilians injured or killed by bombing. Most of Addario’s photos were of US soldiers.

Addario, Rubin, & even Captain Kearney agreed it was from shrapnel because they were present when Afghan elders brought the boy for treatment & said he was injured the previous night when the US bombed a compound where the boy lived. The NY Times instead took the word of public relations officers from the US military who said that could not be verified. Addario protested the blatant censorship to the NY Times, which did not use the photo because it does not suit the Pentagon script about the US-NATO war. (Addario doesn’t tell us much about her views on the war.)

Hetherington & Junger were also embedded with a US army company in Korengal Valley & made an industry out of their work. Combined, they’ve produced three documentaries & each a book on the experience. Their 2010 film, “Restrepo” was nominated for an Academy Award for best documentary & received several other awards. A sequel by Junger (Hetherington was killed in 2011 during the US-NATO war in Libya) using Hetherington’s footage was produced in 2014. Hetherington received many awards for his work.
Like Rubin, Junger & Hetherington focused on the human experience & emotional distress of US soldiers using the film tagline, “This is what war feels like.” Some reviewers faulted the documentaries for divorcing the personal trauma of soldiers from the politics of the war. In fact, that’s baloney. Both Junger & Hetherington supported US-NATO wars in Afghanistan, Libya, & elsewhere & detested those who opposed intervention. At his death, Hetherington was feted by the Pentagon, right-wing veterans, & people like Senator John McCain.

Focusing on soldiers was their way to ennoble the US-NATO war. Ignoring the affects of fighting & bombing in Korengal Valley on Afghan civilians was an expression of colonialism, white supremacy, & pro-war ardency. Afghans were intentionally excluded in that tagline, “This is what war feels like” because to racist, colonial thinkers what Afghans feel like when they’re being bombed to smithereens is of no consequence whatsoever.