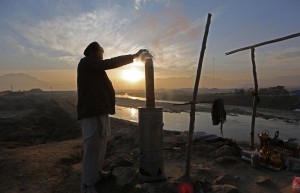 Emancipation US-style: heinous US war crimes in Afghanistan have recently been exposed–including bombing the Doctors Without Borders (MSF) hospital in Kunduz & the torture & murder of Afghan civilians by Green Beret operatives in Wardak. Since the Obama regime has been touting the downsizing of troops (after 14 years of war), one would expect media to be all over the country to investigate what the US is actually doing there. But instead of war journalism, we get this photo of a man in Kabul making morning tea. Simply charming; but not a story of consequence in Afghanistan any more than making morning tea in Tallahassee.

The story in Afghanistan is not old men making tea but US generals making war. What is of consequence in Afghanistan are the estimated 26,000 civilian deaths since January 2015–men, women, & children killed by bombings, crossfire, improvised explosive devices, assassinations, night raids into homes.

A great tragedy of our era is the weakness of the international antiwar movement in responding to the horrors of US wars. Nothing is more imperative than marshaling men & women of good will in defense of Afghans who have sustained over 30 years of war. Find a rally or organize one to demand “US out of Afghanistan!”