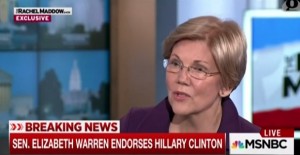 Things just keep getting better & better with lesser evil politics–just when you think they’ve met their Waterloo in the candidacies of Drumpf & Clinton. In any sane society, such a run-off would be the eclipse of electoral illusions. But none cling so tenaciously to pipe dreams than the so-called “progressive left” who will now move from the Sanders revolution to the Clinton bandwagon.

Elizabeth Warren, a favorite of the progressive left, will chasten the impetuous thrust of the “Bernie or Bust” movement with her recent vigorous endorsement of Clinton. She told Rachel Maddow on MSNBC: “I’m ready to work my heart out for Hillary Clinton.” She also told Maddow she was ready & willing to be Clinton’s running mate. It doesn’t take Nostradamus to predict the “Bernie or Bust” crowd will make a stampede back to the Democratic Party if Warren is the vice presidential candidate.

Based on Warren’s compromised politics, it’s actually a very good political fit. But the progressive left considers Warren an exemplar of democratic politics for the same reasons they went gaga over Sanders. She talks consumer rights even while she supports reactionary foreign policy, most especially Israeli colonialism. It’s the old story of provincialism going overseas to roost–& of their not being able to draw connections between economic devastation in the US & drone warfare overseas.

It is the height of political naivety, if not idiocy, to parse political distinctions between Clinton & Drumpf–though we will be thrust into a vortex of scare-mongering by media & politicians like Warren. Either one would be a disaster for working people in this country & around the world. Both of them would be administering the policies of a ruling oligarchy who will not allow their vested interests & corrupt system to be taken out by either of the two wretched candidates but will give the winner the full support of all its agencies of rule. Neither one would be allowed to get out of line with US oligarchic interests which include continuing the war on the Black community; increasing attacks on social services like welfare, education, social security, Medicare & Medicaid; military build-ups in the Asia-Pacific region; military intervention in the Middle East & support for Israeli colonialism. The programs of Drumpf & Clinton would be indistinguishable except in style.

This should be the election & the era for abandoning the dead-end of lesser evil politics & for forging new, realistic ways to make this world suitable for human beings to live & love in.

(Photo is Warren from screen shot of Maddow interview)