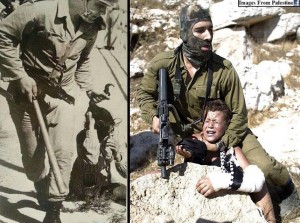 This is an updated post commemorating the 1967 Six-Day War of Israel against Arab regimes which has proven so tragic for the Palestinians. It is a day to recommit to Palestinian solidarity:

Today is the 49th commemoration of the June 1967 Six-Day War when the Israeli military routed the armies of Jordan, Egypt, & Syria. It is a watershed & deeply tragic moment in history. Israel’s victory demonstrated its value to the US as a fortress for US hegemony in the Middle East & US military aid has been increasing ever since. The war altered the relationship between the US & Arab countries to the disadvantage of the Arab peoples & altered the relationship between Arab regimes & the Palestinian people.

In violation of international law, Israel militarily occupied more of Palestine, including Gaza, the West Bank, & East Jerusalem & launched an aggressive settlement program moving Zionist settlers from all over Kingdom Come to claim Palestinian land in the occupied territories.

Many politicians & liberal Zionists call for Israel to remove its troops & go back to the 1967 borders. That’s an unworkable & unacceptable bantustate solution which will only guarantee continuing ethnic cleansing of Palestinians. The only possible resolution under the rubrics of nation-states is a democratic secular state including Jews & Palestinians within the 1948 borders–all of Palestine before Zionist paramilitary terrorists dispossessed them.

Today, there are millions of Palestinian supporters across the globe. Massive protests against Israeli apartheid, ethnic cleansing, & colonialism combined with the economic, cultural, & academic boycott of Israel (BDS) have the power to help bring justice to Palestinians, peace & sanity to Israeli Jews, & an end to US militarism in the Middle East.

(Photo is titled “68 years of occupation: then & now” from FB wall of Images From Palestine)