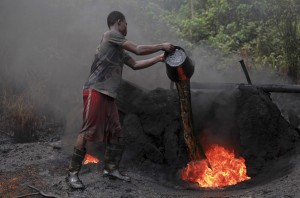 The first Earth Day in 1970 held such promise (even while the US pummeled Vietnam with bombs & Agent Orange) but that was before neoliberalism, the barbaric phase of capitalism, went into full swing in the 1980s.

The environmental movement which has had US mobilizations of over a million people has since been hijacked & corporatized. The corporate funding of organizations is to make sure the movement doesn’t go beyond touchy-feely ritual to political demands. The operative rubric is: “Those whom the gods of capital would destroy they first make money-grubbers.”

This photo is from the Niger Delta in Nigeria, an area of massive oil company plunder & wanton destruction of the environment. It is regrettably an exemplar of how corporations & corrupt regimes cover their asses, with media operating as PR. The media caption claimed this man is engaged in “oil bunkering,” that is, hacking pipelines to steal crude oil, then refining it, & selling it abroad. The caption (quoting the Nigerian finance minister under then president Goodluck Jonathan), said theft accounts for a fifth of Nigeria’s two-million barrels a day production–an estimate at odds with Shell Petroleum claims that theft accounts for up to 100,000 barrels a day.

Shell called for greater security for their pipelines & said such sabotage & theft are responsible for the environmental blight of farm lands & rivers in the Niger Delta that make it look like scorched earth. They explained that Shell flyovers spotted unknown persons tapping pipelines & installing valves to waiting barges & trucks. Media reports in Nigeria & around the world claim Nigerian pirates, militant groups, & criminal gangs are killing their own economy, sabotaging their government, threatening the very foundations of Nigeria’s petroleum industry.

Millions of barrels bunkered every year by pirates with three-gallon buckets!? At what point does propaganda become outright farce? Nigeria is a major oil producer & 80% of government revenues come from oil exports but after 58 years of oil exploration in Nigeria, the kleptocratic government neither meters nor monitors the volume of oil production by Shell & other oil companies, has no functioning regulatory agencies, & doesn’t have a clue what is produced & loaded on to tankers. It is an open secret that after bribing government officials, the oil companies simply loot thousands of barrels.

Nigeria imports most of its fuel due to lack of refining facilities so where are the pirates getting their millions of bucket-loads refined? In sheds behind their houses? The closer you look at the story the sillier it gets.

In fact, Shell has a long history of collaboration with the Nigerian government to use deadly force & repression against opposition to their presence in the Niger Delta, which is an environmental & human rights disaster.

In a US diplomatic cable released by WikiLeaks, it was exposed that politicians & military officials, not pirates, militants, or small time operators, are responsible for the majority of oil thefts. They’re the ones who can commandeer & control access to barges & tankers to help oil companies loot thousands of barrels a day. The diplomatic cable reads: “The military wants to remain in the Niger Delta because they profit enormously from money charged for escorting illegally bunkered crude & from money extorted in the name of providing security on the roads.”

And yet the media portrays neoliberal plunder as the work of small time operators like this man. More importantly, they make Nigerian working people the culprits for taking back a few bucket-loads of the millions of barrels stolen from them daily by a corrupt regime & multinational predators like Shell.

The brief against multinational corporations piles documentation on top of documentation. As they plunder the earth & assassinate activists, they also bankroll the movement formed to oppose them. Either we take back the environmental movement & stand independently with these brothers & sisters or we perish together. That’s not a jeremiad; it’s a certainty.