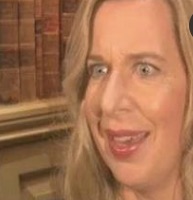 US media is chock-full of all kinds of crazy-pants commentators that make the population appear deranged for tolerating them. But they play a useful political function by expressing the detestable, especially the racism that politicians, the Pentagon, & redneck half-wits want to say but feel they can’t get away with. Ann Coulter, Rush Limbaugh, Howard Stern, Newt Gingrich, & a dozen others on Fox News serve as the voices of social hatred. One can no longer tell if they’re all ugly as sin or if the hating makes them so.

So now out of England we’re getting the stench of an Ann Coulter wannabe named Katie Hopkins whose photos make her look quite deranged but whose racist comments about African immigrants & Palestinians show there’s a purpose to her vituperations. Social hatred is a market niche & she’s playing it out.

Last Fall when Gaza was still reeling & burying their dead from Operation Ethnic Cleansing, she posted a series of tweets accusing Muslim men of being wife-beaters & calling Palestinians “filthy rodents.”

Now she’s put her big barnacled foot in her foul mouth by saying African immigrants are “like cockroaches.” Writing in The Sun newspaper (on Friday just days after 400 immigrants drowned off Libya & two days before over 800 more drowned) under the headline “Rescue boats? I’d use gunships to stop migrants”, she ranted “NO, I don’t care. Show me pictures of coffins, show me bodies floating in water, play violins & show me skinny people looking sad. I still don’t care.”

During the Charlie Hebdo flap she tweeted: “Just getting ‪#‎CharlieHebdo‬ tattooed on my forehead. If you going to go. Go big. ‪#‎JeSuisCharlie‬.”

How about we tattoo our feet on her dumb ass & sign this petition to get her bounced as a columnist for The Sun:

(Photo is Hopkins in all her deranged glory)