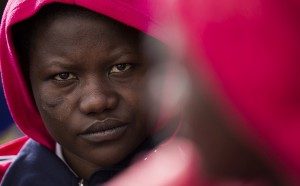 The European Union (EU) & its naval goon squad Frontex are coming under attack internationally for their barbarism in allowing thousands of immigrants to drown in the Mediterranean Sea. If they do not respond to the protests, their continued psychopathic indifference leaves humanity no choice but to set EU politicians adrift in a plastic dinghy with a leak. What was satire now becomes political necessity if humanity is not to collude in this monstrous crime.

Fabrice Leggeri, the head of Frontex whose name translates as horse manure, said saving lives should not be a priority over patrolling & surveillance of the borders. According to him, Frontex has no plans to ask for more boats or increase search & rescue operations near Libya because that would only encourage immigrants to risk the trip. He’s even parsing maritime law requiring ships to rescue anyone drowning. He said, “If you look carefully at the law of the sea, search & rescue is only where there is a distress call.” Not likely to come from a rickety fishing trawler or a dinghy without radio equipment. But with additional aerial surveillance he added, Frontex “can make a difference & anticipate more disasters.” Meaning they can watch mass drownings in real time on their high-tech satellite equipment. The more he talks, the more he documents the need to fry his ass in criminal court.

Of course, he’s just the captain of the EU goon squad. Today the EU is meeting in Brussels for an emergency summit on the crisis in the Mediterranean. They began the meeting with a moment of silence for those men, women, & children who died last Sunday. How about we tell them to take that moment of silence & shove it where the sun don’t shine? Boats, not empty rituals, are what is needed. Reportedly the draft proposal coming out of the summit is to use military force against immigrants under the guise of fighting traffickers. Does that mean troops in Libya? Who will they be shooting at? Has European civilization fallen that low that asylum seekers will be shot at like an invading army? There should be massive protests all over Europe, not just stinking little picket lines.

Piling criminal ignominy on ignominy, the EU summit indicates only 5,000 of the tens of thousands of immigrants will be allowed refuge in Europe. The rest will be deported back to the war zones & poverty they fled. This young man rescued from the sea is at Lampedusa island waiting for a ship to Sicily. The likelihood is he’ll be processed, fingerprinted, & deported without due process.

It cannot be stressed enough that immigration is a central issue in world politics affecting every country. The fate of humanity depends on solidarity with them, on seeing them as brothers & sisters, on standing with them in demanding Europe open the borders. “An injury to one is an injury to all” is not just empty phrase-mongering; it is the iron law of social transformation.