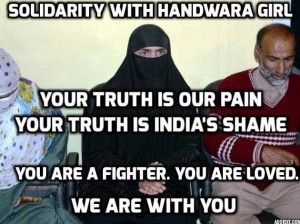 The Handwara, Kashmir teenage girl has been released from police custody after 27 days & an aggressive defense campaign by human rights activists. She spoke at a press conference today with her parents at her side & testified to the coercion & intimidation she endured. Her father & aunt had been detained with her with no charges filed against any of them.

The injustice against her is compounded by the shooting down of unarmed protesters who rallied to her defense. Khurram Parvez, a human rights activist involved in her defense campaign, wrote today: “While very eloquently explaining the events from molestation by Indian soldier to the abuse & threats by the police during 27 days illegal detention, the Handwara minor girl also said, that if her brothers gave their lives for her dignity & integrity, how can she give up on her struggle for justice. She said, she will fight for herself & also for those who were brutally killed in Handwara after sexual assault on her.”

The meme by Ather Zia is to express our fullest solidarity & deepest respect for this young girl who stands now on the front lines against the Indian occupation.