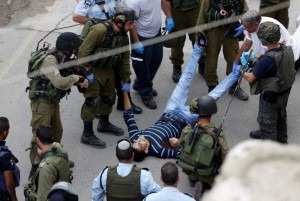 What we have here is documentation of Israeli war crimes against Palestinians in the occupied West Bank. This photo should be submitted to an international tribunal holding Israel to account for its monstrous crimes against unarmed & injured Palestinians.

The Palestinian man who appears to weigh at least 170 lbs/77kgs & is bleeding & unconscious, is lifted by his limbs with no stretcher in sight. Are they trying to tear him limb from limb? What will they do when his body is lifted off the pavement? Throw him in an armored vehicle for arrest? Dump him somewhere? Drop him?

It is observable that while this injured & unconscious unarmed man is being manhandled, an Israeli soldier (standing over him on the left) is pointing a loaded assault rifle at him? We have a right to ask if they shot him & executed him in cold blood? Israel has some questions to answer. And an accounting to make to justice.

Is Israel unaware of the body of international law dealing with humane treatment of the injured? Do they think they’re exempt from its mandates? Picking up an injured man by his limbs isn’t just an outrage to his personal dignity & humiliating & degrading treatment as outlawed in international agreements; it endangers his life. Roughing up a seriously injured man could kill him. We could cite chapter & verse of international law but Israel would continue to flout it & the UN continue to play stupid in the face of evidence like this photo.

Defend Palestinians against the pogrom of apartheid Israel. Build BDS, the economic, cultural, & academic boycott of Israel (barcode beginning 729) & demand no aid of any kind to Israel. Stop the violence! End the occupation!