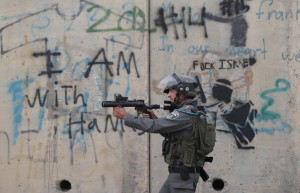 Media support for the Israeli pogrom against Palestinians is erupting in a white heat. The Daily Mail (UK) gossip tabloid published “The mothers fighting back against Jihadi knife maniacs… with guns, frying pans & rolling pins” complete with an album of Palestinians brandishing knives. The Algemeiner journal published an article by Bernard-Henri Lévy titled “Things We Need to Stop Hearing About the ‘Stabbing Intifada’.”

In the interests of full disclosure, Algemeiner is a rabidly Zionist tabloid with Elie Wiesel on its editorial board & which honors some of the biggest names in Zionism like William Kristol, Alan Dershowitz, Ronald Lauder, & Dr. Ruth Westheimer (once a sniper for a Zionist terrorist organization that drove Palestinians off their lands in 1948). Wiesel is the guy who published full page ads during Israel’s carpet bombing siege of Gaza claiming Palestinians used their children as human shields. BH Lévy is the deranged French guy who writes right-wing screeds on many questions, but most often justifying Islamophobia.

Lévy & Algemeiner are concerned about the growth of BDS & Palestinian solidarity & his article is an attempt to portray Palestinians as knife-wielding jihadists or kamikazes. It’s canned & rabid stuff & not of much interest since Lévy is a blowhard of little intellectual substance–& could be knocked over by a feather in a debate with a Palestinian. Algemeiner’s claim that the article was removed from several Zionist walls by FB should be an embarrassment since it’s readily available on several. But the tabloid just makes up stuff. It’s far less journalism than stinky manure compost.

What is of interest in the Algemeiner article is the report that Israeli law firm Shurat HaDin, associated with Mossad & founded by Nitsana Darshan-Leitner (who was personally trained by the Southern Poverty Law Center) is launching a class action lawsuit against FB for “the proliferation of pages in Arabic that call for the killing of Jews.” The intent of course is to silence the voices of Palestinian Intifada & solidarity.

An Israeli Foreign Ministry official told Algemeiner that his office was attempting to get FB & Google (which owns YouTube) to “remove incendiary material & prevent similar content from appearing in the future.” Darshan-Leitner insists FB should monitor its posts about Israel: “If it’s got algorithms for consumer purposes, it can have algorithms for other purposes, as well.” Other purposes of course being to serve Israeli propaganda & prevent Palestinians from being heard.

Attempts by Israel not just to abridge but to destroy free speech on social media are dangerous & a dead giveaway. Deeply irrational & undemocratic impulses are the hallmark of fascism, not free societies that have nothing to fear from the truth. It isn’t threats or vituperative language Israel wants removed but every Palestinian voice & every trace of BDS & international solidarity.

The Daily Mail article about Israeli mothers arming against Palestinian jihadists showed several photos of Palestinian activists holding up knives at protests–images that are supposed to scare the bejeezus out of us. They were likely Palestinians sarcastically flouting Israeli & media lies since even if they had knives, they would not serve them well against tanks, bulldozers, grenades, & live ammunition. Knives to be effective require up close & personal contact. Israel’s arsenal can be used long-distance.

In the “Raiders of the Lost Ark” film series by Zionist Steven Spielberg, the portrayal of Arabs is massively racist. In one scene, an Arab is standing off in a duel with a long dagger against Indiana Jones. It’s supposed to be a moment of hilarity when Jones pulls out a pistol & shoots him. That’s how ridiculous the media narrative is.

But there’s one more thing. According to the media narrative, Palestinians are going wild with knives in Jerusalem. How the hell are they entering the city when it’s on lockdown?

Not to be daunted, we keep our eyes on the prize & build the hell out of the economic, cultural, & academic boycott of Israel & continue protests demanding no aid of any kind to apartheid Israel. Stop the violence; end the occupation.