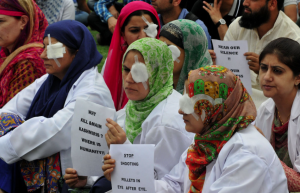 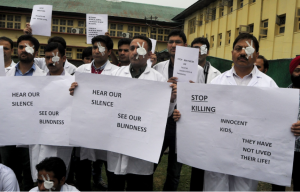 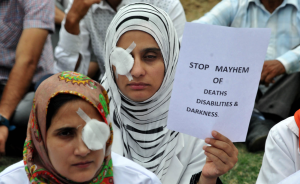 During the murderous siege of Gaza in 2014, including the bombing of hospitals & ambulances, the role of medical personnel was extraordinary because they continued to pull the injured out of rubble & bring them for treatment whilst under aerial bombardment & despite what must have been overwhelming grief & trauma for them.

Now we see the same phenomenon in Kashmir with doctors protesting in the streets against pellet munitions which are blinding & crushing the lives of so many, including small children, & must be living hell for medical personnel to deal with.

These are photos of doctor’s protesting outside SMHS hospital in Srinagar. Our deepest respect because they must be exhausted & overwhelmed. And still they protest.

End the occupation. Stop the use of pellet guns. Self-determination for Kashmir.