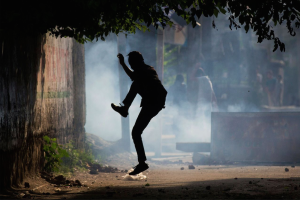 This is the second of two photos in todays news about the Indian siege of Kashmir, now in its 33rd day. It was captioned, “Protests in Kashmir: A Kashmir Muslim protester jumps to avoid a projectile thrown at him by Indian paramilitary soldiers during a protest in Srinagar, Indian-controlled Kashmir, on Aug. 9, 2016. Indian Prime Minister, Narendra Modi appealed to the people of Indian-controlled Kashmir to shun violence after a month of anti-India protests & deadly violence.”

So you see? If unarmed Kashmiri protesters just accepted Indian control, then Indian soldiers would not be compelled to shoot pellet guns, live ammo, & tear gas at them, would not summarily execute young men biking back home after work, would not fill hospital wards with pellet-ridden, blind victims, would not be attacking ambulances, & would not be arresting protesters in droves. Everything in Kashmir would be hunky-dory if they just accepted tyranny.

That media twists the narrative to make the Indian army & paramilitary thugs the peacekeepers & unarmed protesters the instigators of violence is beyond grotesque. But that’s what media does as the servile valet to power.