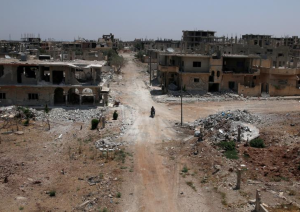 Deraa, Syria after years of carpet bombing by Syrian & Russian bombers: indistinguishable from Gaza, Yemen, Iraq, & the rest of Syria. There are nearly 147,000 civilians in the Deraa metropolitan area. This is not liberation from terrorism. This is terrorism.

Deraa became known as the “cradle of the revolution” after the Assad dictatorship arrested 15 teenage boys for spray painting graffiti against his regime in 2011. This sparked protests across Syria that ignited the massive revolution of working people against dictatorship.