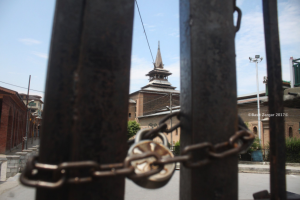 Throughout the siege & occupation of the Al Aqsa compound, Kashmiris have over & over again used social media to express solidarity with Palestinians. They understand the denial of religious freedom & desecration of Muslim holy sites because Indian occupying forces are engaged in the same aggression at Jamia Masjid in downtown Srinagar.

For the sixth consecutive week, Indian authorities have padlocked the premises to disallow congregational Friday prayers at the mosque. Denial of the right to worship is fundamental to the occupation & part of the international onslaught against Muslims. Standing with their right to religious freedom is part of the struggle against war, occupation, ethnic cleansing from Srinagar to East Jerusalem to Syria & Myanmar.