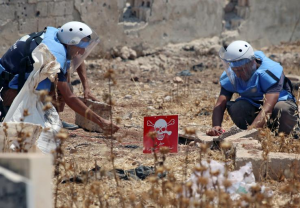 These are White Helmet rescue workers in Deraa, Syria taking advantage of a temporary ceasefire to clear unexploded cluster bombs dropped by Syrian air strikes. There are thousands of unexploded ordnance laying in the ground waiting to detonate & take out everything & everyone in proximity. Children are frequent victims.

Undetonated cluster bombs & other munitions cannot be handled & destroyed by untrained amateurs but require explosive specialist training & specialized equipment so they don’t blow themselves up. White Helmets play the function of bomb squads after receiving training courses in Turkey & Jordan & being provided with the necessary equipment. It still remains an extremely dangerous job.

Civilian rescue teams emerged in Syria in 2012 when Assad began bombing cities or areas where there was massive public opposition to his dictatorship. It was neighbors & residents coming to rescue the injured trapped in rubble from the bombing. Of course foreign agencies with ulterior motives glommed on to them; it happens all the time to human rights groups & activists all over the world. In some cases, it tempers the resistance of those groups. In the case of Syrian rescue workers now known as the White Helmets, it got them professional training in urban search & rescue operations, emergency & trauma care, setting up & managing field hospitals in a bombing zone, & in operating as bomb squads. It made them more effective in rescuing people buried in rubble, in treating their injuries, & saving their lives.