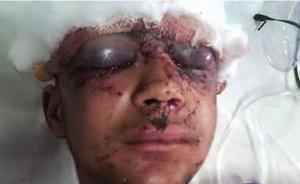 Apparently nationalists are using the photo of the little boy with a rock striking an armored vehicle to discredit Kashmiri Intifada. Perhaps this photo of a young boy injured by pellet munitions last year during attacks on protesters will clarify why children show such courage against a brutal occupation.

The nationalist mind is twisted like the Assadist & Zionist minds–demonizing children who are victims & targets in occupation rather than oppose a monstrous occupation.

As Syed Ali Geelani said, “Occupation is a disease & atrocities are its symptoms”

(Photo is from Rising Kashmir)