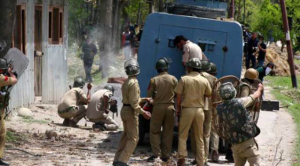 Day 91 of the military siege in Kashmir:

92 Kashmiris killed, 13 from pellet injuries: most were protesters, some were children in their homes, some elderly traumatized by army violence.

Over 12,344 injured admitted to Kashmir hospitals: 7,136 with pellet injuries–over 1.000 blinded, including 300 totally; many with perforated vital organs from pellets, such as brains, lungs, heart, liver, intestines, kidneys; & permanent disfigurement for most; 374 injured by live ammo.

According to official government statistics, over 7,000 arrested: 450 are booked under the Public Safety Act allowing detention without charge; 1,500 help in police stations across Kashmir not included in the 7,000 statistic.

Number of disappeared not officially recorded.

Just as Israel in Palestine, the Indian occupying army is targeting youth & for the same reason: to destroy Kashmiri Intifada & the struggle for self-determination.