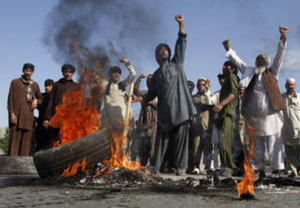 Vijay Prashad, a leading intellectual for what is called the left, wrote an article for Alternet titled “15 Years Later the Taliban Is Back in Power in Afghanistan & More Radical Than Ever.” It was published on the eve of the 15th anniversary of the US-NATO occupation of Afghanistan. Prashad wrote: “The US war aims were simple: prevent Afghanistan from being a haven for al-Qaeda & bring democracy to Afghanistan by ejecting the Taliban. There were also noises made about liberating women & educating the Afghan citizenry.”

It’s news to veteran antiwar activists that the purpose of the US war was to bring democracy to Afghanistan. Certainly Afghans would give testimony (as they do in this photo) that massive bombing; monstrous war crimes; CIA & US military torture prisons; tens of thousands killed or maimed by land mines; schools, homes, mosques, fields, bombed to smithereens; millions of war refugees in Iran, Pakistan, & Europe; thousands of war orphans & child workers; tens of thousands killed, including 11,000 this year, have not been particularly effective ways to teach primitives like themselves what democracy is all about.

So does Prashad think the Taliban are more the problem in Afghanistan than US occupation? We ask this question because he also favorably posted Max Blumenthal’s attack on White Helmet rescue workers in Syria which uttered nary a peep against Russian & Syrian bombing of cities with hundreds of thousands of people. Does Prashad believe the people being carpet bombed in Aleppo are what Assadists call “US-backed & financed head-chopping, heart-eating rapists” & not ordinary men, women, & children?

So has Prashad joined the US Pentagon’s war on terrorism, seeing “jihadists” as the problem in the Middle East & that occupation & bombing are the best way to teach those backward people what real democracy is?

You can’t have it both ways in politics. Understanding Taliban politics & their role in Afghanistan is essential. But when you focus your analysis on them rather than 15 years of US bombing & brutalities, you are making political compromises. Whatever makes Prashad think the US has anything to do with resolving political conflicts in the Middle East—most of which have been created by colonialism & US & European intervention?

The photo shows what Afghans not profiting from US drug trafficking think of the US occupation: it is a 2010 protest of Afghans blocking a major highway to Kabul & shouting “Death to America” .

US out of Afghanistan! US out of Iraq, Pakistan, Syria, Yemen, Somalia! We demand the immediate, unconditional withdrawal of US & all foreign military forces–air & land, overt & covert.