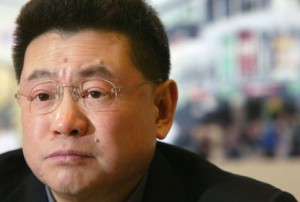 You can write long-winded tracts, heavy on the abstraction, to explain what’s wrong with capitalism. Or you can keep it simple & to the point. This guy is Joseph Lau, a Hong Kong real estate developer worth nearly $12 billion. Lau & his brother own umpteen-millions of dollars in apartments & other holdings in Hong Kong. Under those buildings, tens of thousands of working people & their families live in cramped, squalid quarters & wire cages because they can’t afford housing.

Lau, whose fortune is partially based on bribery & money laundering, just spent $48.4 million on a blue diamond & $28.5 million on a pink diamond for his 7-year-old daughter. She already owns a $9.5 million blue diamond he bought for her when she was only one.

But what price his largesse. One in five people in Hong Kong live in poverty: in a population of 7.2 million people, that’s over 1.5 million people living destitute.
Over 300,000 children do not get enough food every day–nor do one in three seniors. Over 52 percent of homeless are seniors. There are only an estimated 1,500 homeless people sleeping rough every night because Hong Kong uses loudspeakers at hourly intervals to clear out areas where they sleep; adapted water-sprinklers to target homeless people in park areas; sprays corrosive antiseptic powder to cause itching & landscapes areas to prevent anyone from sleeping there.

Confronted with that damning information, all we can say is “justify that, bucko!”

(Photo of Joseph Lau by SCMP from Forbes)