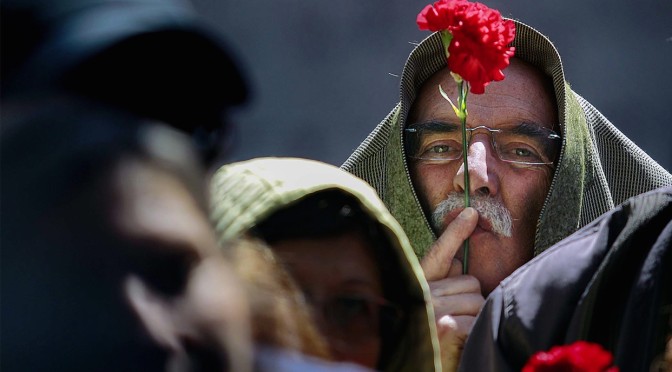 Today marks the 40th anniversary of the 1974 revolution that restored democracy in Portugal. Without going into the complexities of that revolution, a dictatorship that had ruled since the 1930s was swept away along with their secret police in what is touted as a bloodless revolution. Civil liberties & political freedoms were introduced, including freedom of speech, the right to vote, labor rights, universal health care, & pension rights. Political prisoners were released & Portuguese colonies in Africa & East Timor were immediately given independence. It was a momentous revolution & the carnation became its symbol.

Now the question must be asked: what distinguishes the fascist dictatorship from the EU-IMF austerity program? With the notable exception of colonies, they’re really quite hard to tell apart. Next time, there may have to be a scuffle or two. The gains of 1974 have not been decisively reversed & the evidence of that is massive opposition by working people to neoliberal plunder.

This man with a carnation is participating in a ceremony marking the anniversary.