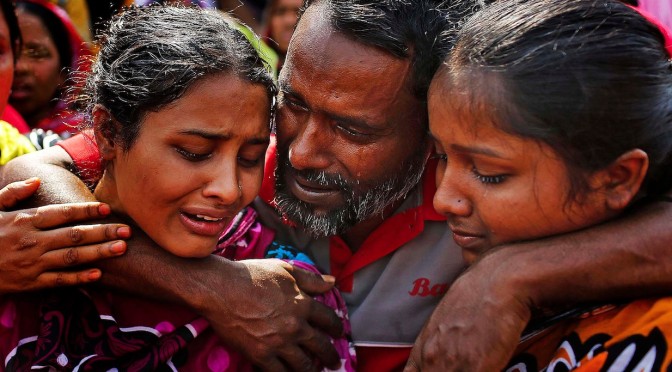 This is a portrait of grief & not just grief, but resistance to exploitation. These are people who lost beloved family members when Rana Plaza collapsed one year ago killing 1,138 garment workers. They did not gather yesterday at the site of the collapse just to mourn but to demand change.

Many think they’re fighting a losing battle against superior political & social forces including the Bangladesh government, international retailers like Walmart, & trigger-happy riot cops. Many think they’d better stick to weeping since opposing sweatshop capitalism is a utopian pipe dream. Color those many clueless!

Margaret Mead famously said, “Never doubt that a small group of thoughtful, committed citizens can change the world. Indeed, it is the only thing that ever has.” How much more so then can these men, women, & children joined in international solidarity numbering in the millions? Together we can not just end sweatshop manufacturing but we can make this world suitable for human beings to live & love in.