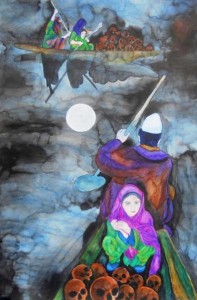 “The Frozen Moon” by Rollie Mukherjee: on a full moon night a Kashmiri man rows a boat through Dal Lake in Srinagar with a girl, probably his daughter, crouched behind him & a boat filled with skulls. In the background two women with a child row a boat also filled with skulls. “The moon is cruel & coldly observes the unfolding tragedy.”
*****
The artist said about this work that it “shows a gruesome reality…that chills ones spine……on the day to day basis Kashmiris are existing by rowing through the misery of death of their dear ones……the coldblooded moon silently witnesses the deaths every night.”

In an article about her Kashmiri drawings she said, “My figures scream & yell, seething in anger; their sound is an attempt to tear off the silence of the oppressive force. It’s the absence of real sound in my work that haunts in the emptiness. They are not the victims. They scream & shout & fight. Their sound will haunt us no matter how much & how big a force attempts to suppress their voices.”

The full article by Rollie about her work is very powerful, explains how she, as an Indian artist, became interested in repression & resistance in Kashmir, has some brilliant insights about art & politics, & is very much worth reading:http://www.kashmirink.in/…/knots-of-resistance-in-…/168.html)