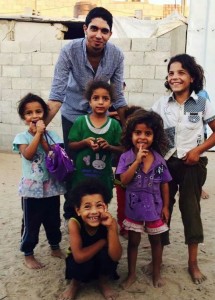 This photo of Muhammed M. Kabariti, an activist in Gaza, with small girls was taken after Israel’s murderous siege ended on August 26th. There are many reports about the unspeakable psychological trauma suffered by children who survived. If we consider that war veterans act out PTSD in mental illness, addiction, violence, homelessness, suicide, then we can imagine the scope of the suffering imposed on these small children by Israeli ethnic cleansing–especially when they were among it’s chief targets.

The many photos of children at the beach, playing in rubble, giving the “V” sign, & posing like this bring to mind the remarkable poetry reading in London (in 2011) by Rafeef Ziadah, a Palestinian activist & poet. The poem titled “We Teach Life, Sir” will leave you breathless.