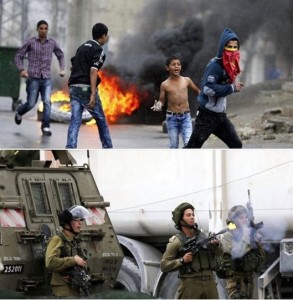 Media knows if they repeat a lie long enough it will become accepted as the gospel truth. So they continue to hammer the drum loudly about Palestinians running wild with knives. They continue also to explain the disparity between 8 Israeli fatalities (allegedly from knife attacks) & 57 Palestinian fatalities (including an Eritrean asylum seeker mistaken as Palestinian & beaten to death by an Israeli mob) by saying half the Palestinians were shot during a knifing assault. The fact that it’s not a credible alibi has not made them stop using it.

That ‘lying till it becomes truth’ schtick always flew & became incorporated into history so that now we have entire nations with twisted views of colonialism & war: colonial marauding became salvation from backwardness & barbarism; war became emancipation.

But then the anti-colonial struggle entered history & though many have been ruthlessly defeated, not all were, & they have left a legacy of opposition to racism & colonialism that has not been reversed or undone. Social media & the internet are often attributed with spreading the truth & creating solidarity–& their role cannot be denied. But were it not for the intransigence of anti-colonial activists, including many who died in struggle, we would not today recognize truth from the horse manure of malicious lies.

There are hundreds of photos of Palestinian activists armed only with rocks against Israeli military forces with the most sophisticated arsenal in the world. Miko Peled, a former Israeli soldier now a Palestinian solidarity activist, has said, “The IDF are not an army; they’re the most well-funded terrorist organization in the world.”

The top photo here is Palestinian protesters today in the occupied West Bank village of Si’eer (north of Hebron); the bottom photo is IDF soldiers facing off against those protesters. Take a look at the faces of those soldiers. Psycho is the first thought that comes to mind; armed to the teeth against unarmed kids is the second.

International solidarity must build on the legacy & courage of Palestinian activists & stand undaunted against the barrage of media lies & the endless propaganda initiatives that will be thrown up to discredit the Palestinian struggle.

Build the economic, cultural, & academic boycott (BDS) of Israel initiated by Palestinian activists & continue rallies demanding no aid of any kind to apartheid Israel; end the violence; end the occupation!

(Both photos by Abed Al Hashlamoun/EFE/EPA)