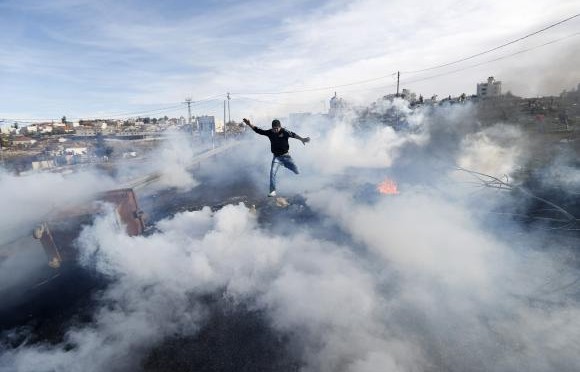 If an establishment human rights group like Amnesty International (AI)–the winner of their Nobel Peace Prize, no less–issued an investigative report on Palestinian terrorism toward Israel, the entire media would be burning up the wires with photos, denunciations, & on-the-spot investigations showcasing heart-wrenching stories of civilian trauma at the hands of the Arab barbarians. They would be burning up the wires because such a fictitious report would document pro-Israel propaganda that is a staple of media reporting.

This bias explains why most media is entirely mute on the most recent AI report (issued Feb 27th) entitled “Trigger-happy: Israel’s use of excessive force in the West Bank.” The investigation details the extreme violence of the past three years by the Israeli military toward Palestinians, called a callous & reckless disregard for human life but more appropriately called ethnic cleansing. It includes not just massive incarceration, including hundreds of children, but the murder of dozens of Palestinians (also including children) & the injuries of thousands (again including hundreds of children) mostly for stone throwing. The weapons employed by Israel include live ammunition, rubber-coated metal bullets, tear gas, stun grenades, water cannons, chemical & malodorous skunk bombs. Hundreds of injuries are caused by shrapnel.

The AI report focuses only on the West Bank & does not include the adjacent Gaza Strip although AI has previously issued reports denouncing the Israeli blockade of Gaza. The NY Times buried mention of the West Bank report in an article on page nine; the Washington Post, so Johnny-on-the-spot in denunciations of Palestinian terrorism (that is, self-defense), doesn’t appear to have reported the story at all. The LA Times, Reuters, & the UK Guardian did report the story which gives irrefutable evidence of Israeli war & human rights crimes.

After describing the crimes & charges in the AI report, Reuters inexplicably refers to the conflict as “a low-intensity confrontation.” Well that sure as hell would depend on whether you’re Palestinian or Israeli, wouldn’t it!? If you’re on the receiving end of rocks, it’s pretty damn low-intensity; if you’re on the receiving end of live ammunition & ethnic cleansing, it doesn’t get more high-intensity than that.

Israel’s Foreign Ministry responded with the usual defense, saying the AI report “smacks of bias, discrimination, & racism” & accusing Amnesty of wanting to deprive Israel of the right to self defense. Nice try Israel, but your military is an occupying army protecting thousands of Zionist settlers from around the world moving in & expropriating Palestinian lands! The guilt-baiting is supposed to bring anti-Zionism to its knees but ethnic cleansing speaks louder than tedious accusations.

Amnesty calls on the US, the European Union, & other countries to stop delivering munitions, weapons, & other military equipment including crowd control weapons & devices, & training to the Israeli military. It would have been good if AI had stopped there instead of adding that such deliveries should only be resumed when Israel can ensure their arsenal will not be used to violate international humanitarian law & international human rights law. Israel has no rights whatsoever to be in the West Bank or to continue moving in settlers to violently expropriate Palestinian lands. It would be more consistent with the findings of the report to demand Israel get the hell out of the West Bank but you can only ask so much of an establishment human rights group. The recent exposé, even with its limitations, serves justice well.

This photo is of a Palestinian protestor caught in a tear gas barrage by Israeli soldiers in the Jalazoun refugee camp near the West Bank city of Ramallah (Jan 31st 2014). Does this look like a “low-intensity confrontation” to you?