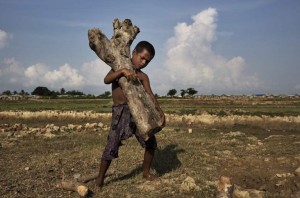 This little guy is 7-year-old Thek Kay Pyin working at a brick kiln in Rakhine state, Myanmar. Child labor doesn’t make Myanmar stand out; it exists in every country, including the US which has 800,000 mostly Latino child farmworkers working legally. Though the fact that it’s ubiquitous or legalized certainly doesn’t make it one iota less criminal or reprehensible.

But what’s distinctive about our little guy is that he lives in a concentration camp because his family is Rohingya Muslim, subjected to ethnic cleansing by the Myanmar regime. This is not a recent genocide; it’s gone on for decades. So we’d really like to know why in 2012, at the height of a murderous assault on Rohingya that sent tens of thousands fleeing (& got many killed), Obama called on other Asian nations to model Myanmar’s “remarkable journey” toward democracy. Hillary Clinton, today’s populist champion, also made a pilgrimage to Myanmar praising its democracy. What is it about genocide that escapes their grasp!?

But of course, let’s not fool ourselves. Obama & Clinton know exactly what is going on in Myanmar. One of the biggest navies in the world couldn’t send a single ship to rescue tens of thousands of Rohingya afloat in death ships. Because to neoliberal politicians (& as we know from the refugee crises all over the world & the Greek euro crisis, politicians don’t come sleazier or more criminal than the neoliberal kind) some lives are expendable. Millions of human lives just don’t count in their calculations so genocide gets coupled with eugenics as state policy. That’s why neoliberalism is the barbaric phase of capitalism.

Our fullest solidarity with Rohingya Muslims. Our deepest regrets little Thek Kay Pyin has no options right now. But sure as shooting, we cannot let media bury this genocide any more or as thoroughly as they also bury other human rights monstrosities like in Gaza & Kashmir.