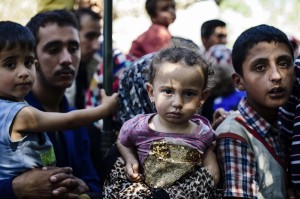 Vilifying immigrants & refugees isn’t just a staple of right-wing talk radio in the US or boneheads like Donald Trump. The US government has used it for at least 130 years to justify discrimination against immigrant groups. Inflammatory accusations played a big role in drug policy & prohibition–first against Chinese immigrants & opium; then against Black Americans moving north from Jim Crow (US form of apartheid) & cocaine; & against Mexicans & marijuana. The problem was not their high rates of addiction; on the contrary, studies showed low rates. But associating them with excessive drug use allowed associating, especially Blacks & Mexicans, with orgies & rape of white women. As contemptible & stupid as Trump is, he is repeating ancient racist & xenophobic verities cooked up in the US Bureau of Narcotics, testified to in the US Congress, & promoted in the NY Times.

Those of us outside European countries & Australia can only imagine what their xenophobes are peddling against immigrants. But as anyone who has studied the development of legislation & proscription against immigration knows, all of these countries collaborate on policy, formulate them to suit national circumstances, & likely suck at the same trough for hateful propaganda. Social hatred is fundamental to divide & conquer & working people have been held in its stranglehold for too long. There is no way around the iron law of social transformation that “an injury to one is an injury to all.” That’s all she wrote!

The dislocation of entire families from their homelands is primarily a phenomenon of war & catastrophe & is now a central feature of immigration. Nothing puts the lie more quickly to the hateful rubbish immigrants are subjected to than the massive presence of small children in the millions of refugees around the world–& not just small children with parents, but unaccompanied minors.

These children are Syrian refugees queueing up at an immigration center in Serbia to apply for asylum & get documents allowing them to stay for 72 hours. Children are the face of modern immigration all over this world, including those crossing the US-Mexican border. Perhaps hardened misanthropes & right-wing psychos don’t give a damn what happens to kids, but most working people do. And we need evangelize for the rights of immigrants to cross borders unimpeded because the welfare of children is now central to the human right of immigration–& the Obama regime is not the only one to flout that.

Immigration is a human right. Open the borders!