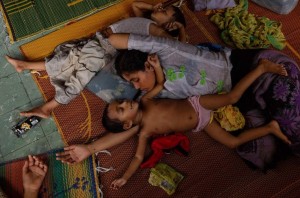 Media generally operates by the mantra “out of sight, out of mind” when it comes to ethnic cleansing & massive human rights crimes–like in Myanmar (or Kashmir). Instead, we are subjected to endless panegyrics about Nobel Peace Prize winner Aung San Suu Kyi, who is not so much silent on genocide as in tacit agreement.

For several weeks it was reported that 25,000 Rohingya had fled persecution, violence, & concentration camps in Myanmar to find refuge elsewhere. The world witnessed days of boats filled with Rohingya drifting without food or water in the Andaman Sea. We were coached by media to denounce the traffickers who abandoned the ships & ignore that they only abandoned when they weren’t allowed to port & discharge refugees & faced detention themselves.

But now all’s well: Indonesia & Malaysia took in 3,500 refugees; a Turkish military vessel said it was doing search & rescue; Myanmar picked up a few boats & dragged them back to the hell they fled from; & Obama “urged Myanmar to end discrimination.” Boy you don’t get tougher than urging, do you!? How about talking about genocide in Myanmar even half as tough as he does about ISIS?

But questions remain: what happened to the other 21,500 Rohingya? Are they still out there floating in death ships? Were they rescued? Did Turkey actually deploy a ship & rescue anyone? If they did, where did they take them? And what happened to those “rescued” by the Myanmar navy? Were they tortured or arrested for embarrassing the regime & its ignoble Nobel recipient? Or were they returned to concentration camps?

Just because media turns a blind eye doesn’t mean we should be fooled that all’s well in this worst of all possible hellholes. There’s some accounting to do to justice. What exactly has happened to the 21,500 Rohingya not yet accounted for?

Our fullest solidarity with the Rohingya.

Photo is of refugees in Indonesian refugee camp taken in late May.