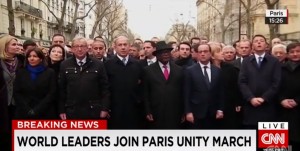 Perhaps it’s fitting that what began as tragedy ends up as farce in the official French tribute to Charlie Hebdo. After all, if we’ve learned nothing else from this massacre, it is that you can play anything for a laugh.

It’s customary that US antiwar protests are led off by antiwar veterans because of the moral authority they have on the barbarity of war. So it’s disconcerting to see a political rally led off by war criminals. It’s disturbing to see them lead a march for free speech when they send riot cops with tear gas, grenades, water cannons, rubber bullets against unarmed protesters in their own countries. Will the Russian foreign minister go back to Putin now & argue against repression? Will they stop incarcerating dissidents? Will France stop banning Palestinian solidarity rallies? Will Eric Holder come back & have a chat with Obama about pulling SWAT teams out of the Black community? And will the US now rethink that surveillance system that monitors our every email & FB post?

It’s not an accident Netanyahu is center stage in this criminal line-up. Israel’s murderous siege on Gaza discredited the Exodus myth so carefully cultivated for 66 years & that jeopardizes neoliberal capitalism’s plans for the Middle East. This is rehab mode, street theater, farce. It is also an act of aggression against Muslims.

In response, we continue to build the economic & cultural boycott (BDS) of Israel; we continue to demand US-NATO get the hell out of Afghanistan & Iraq; we demand civil liberties to march for those demands without being attacked by riot cops.