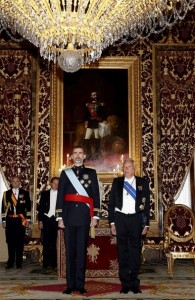 Satire just can’t keep up with reality. They report the news, you think you’re in the Fourth Dimension. First we have the assembly of international mass murderers leading a march for free speech in Paris–because if anyone is going to be taking people out for what they stand for, it’s going to be them. They adhere the right of terrorism entirely to themselves.

Feudalism has its own contribution to make to this travesty. This is Felipe VI observing a minute’s silence in Madrid to support the Charlie Hebdo rally. He looks like a fool but at least he had the good sense to stay home since Spain is trying to impose a draconian Public Security Law gagging free speech & outlawing all protest.

Satire isn’t dead but we shouldn’t have to go back in history to find great stuff–like Daumier & Swift. Young writers with an eye for the ironic & an outrage at injustice need to start sharpening their tongues because we’re going to need a lot of laughs to get us through the barbarism of neoliberalism. Cynicism is not an option. We have a world to change.