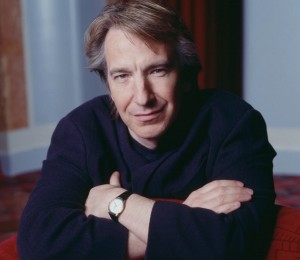 The English actor Alan Rickman died today from cancer. Though he was one of my favorite actors, I knew very little about him except that he was one of the few actors from a working class background. Much more noteworthy however is his play “My Name is Rachel Corrie,” written by Rickman & journalist Katherine Viner (based on Corrie’s diaries & emails) & directed by him.

Corrie was a 23-year-old American & Palestinian solidarity activist crushed to death by an Israeli bulldozer in 2003 as she tried to obstruct the demolition of Palestinian homes in Rafah, Gaza Strip. She continues to be respected & honored as a symbol of commitment to international solidarity.

“My Name is Rachel Corrie” was first staged in London in 2005 but has since played all over the world. It has received several theater awards (including for best director & best new play) as a work of art, not a polemic. It was scheduled to play off-Broadway in NYC in 2006 but was “postponed indefinitely” after the director James Nicola polled Jewish religious & community leaders to get their reaction to the play. Nicola said: “We found that our plan to present a work of art would be seen as us taking a stand in a political conflict, that we didn’t want to take.” He said the recent election of Hamas & the sickness of Ariel Sharon, the Israeli prime minister, had made “this community very defensive & very edgy.”

Rickman denounced the decision as “censorship” because of course canceling its performance was taking a stand with Israeli apartheid. He said “Calling this production “postponed” does not disguise the fact that it has been cancelled.” In tribute to Corrie, he said: “Rachel Corrie lived in nobody’s pocket but her own. Whether one is sympathetic with her or not, her voice is like a clarion in the fog & should be heard.” The play was performed a few months later in Greenwich Village & has since been performed several places in the US.

We tip our hat to Alan Rickman. May he Rest In Peace.

(Photo of Rickman from 1992 by Didier Olivré/Corbis)