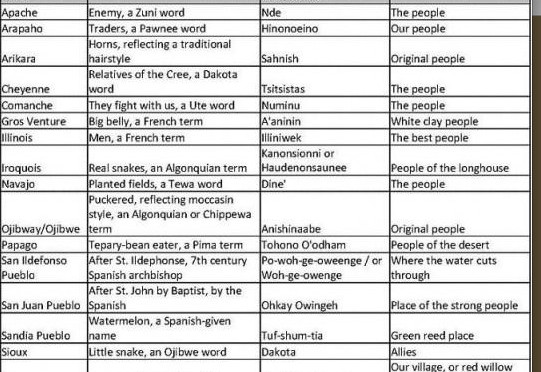 One of the peculiar features of colonialism & oppression is dispossessing people of their proper names. Often colonial forces simply changed the tribal names of people but they always invented entire catalogs of insulting epithets. The peculiarity is understanding whether this demeaning originated in some psychological device in the oppressor to justify oppression or whether it is a conscious device of social hatred & social control. And it isn’t just with ethnic groups: you see it with women (we have our own catalog of epithets to ward off), with LGBTI people, & others.

This name-changing thing is a common feature of oppression–from oppressed castes in India to Native Americans, Blacks, & Latinos in the Americas. And if we knew enough about Africa, we would probably find it prevails there too. (We don’t glory in our ignorance; it is very hard to find sufficient texts in US libraries on almost any country or region of Africa. The precious few texts available are most often pickled in racism & white supremacy–& oddly are often only in the juvenile section of the library.)

There are dozens of names for Blacks in the US alone. Excluding the repugnant epithets, the proper name has changed at least four or five times since the Civil Rights Movement in the 1960s. The Term “African-American” so in vogue now seems to be an attempt to break with the association of “Black” with Black power. As a Black co-worker once explained, “They think if they keep changing our names we’ll be fooled into thinking things are changing & stepping in the right direction when they aren’t.” Almost every single history on Native Americans is prefaced with an explanation of the name that text will use. And people, even those who are not disrespectful, are still confused over whether Hispanic is the correct term, or is it Latino?

That would explain why so many groups organizing against oppression reclaim their historic names & shuck the colonizers labels. Women are doing the same thing (though that slut thing might be a regression & concession to the oppessor’s language more than a reclaiming). Reclaiming their own names is part of reclaiming their dignity & it behooves the rest of us to learn their proper names & not just refer to them with the ethnic equivalent of “hey you.” They should not all be simply lumped together as “Indigenous”; they have names. In North America, the colonizer’s misnomer is Ojibway–the tribe calls itself Anishinaabe; the colonizer’s misnomer is Comanche–the tribe calls itself Numinu

This chart includes just a few US tribes but this process is being repeated throughout the Americas & throughout the world. Reclaiming proper names is asserting dignity & demanding respect & that’s an essential part of social transformation.