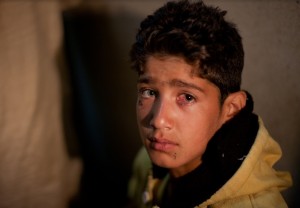 Facebook is systematically removing posts describing the violence in Kashmir & suspending those who post them under their community standards provisions to ‘prevent abuse, direct threats, encouraging violence, terrorism, or hate speech.’ Their action against the Kashmir posts has been swift & without warning. In a second you are notified the post was removed & you are blocked. The problem is that none of the posts violate any such standards & are well within the norms of respectable journalism, with the exception that they tell the truth about the barbarism of the Indian occupation.

There was nothing personal in the public display of affections between Indian prime minister Narendra Modi & Mark Zuckerberg. It only sealed the unsavory political deal they had struck where FB would censor news about the Indian occupation of Kashmir. The systematic decades-long news blackout in media was being countered on social media by Kashmiri activists. India perceived that as a direct threat to the continued occupation of Kashmir because they have witnessed the massive growth of Palestinian solidarity as a result of social media countering the lies of corporate news sources.

It is only an apparent irony that the Israeli law firm Shurat Hadin led by Nitsana Darshan-Leitner has just filed a $1-billion lawsuit in a NY district court against Facebook Inc., alleging that it violates the US Anti-Terrorism Act by providing a platform to militant groups for “recruiting, radicalizing, & instructing terrorists, raising funds, creating fear & carrying out attacks.” According to Shurat Hadin, the lawsuit is to force FB to “take responsibility” for the content “floating around their sites.” They see it as a free-for-all for Palestinian solidarity that must be suppressed.

The lawsuit specifically cites Hamas who govern the Gaza Strip when there isn’t a shred of evidence beyond the scope of ridicule showing that Hamas is recruiting or doing anything else nefarious on FB. But Hamas is not the target of this lawsuit because it is no threat to Israel when Gaza is controlled by an Israeli embargo & periodically bombed to smithereens. The sole purpose of this lawsuit is to force FB to crack down even more on Palestinian solidarity activists & on those advocating for BDS.

This lawsuit should be taken very seriously since in February 2015, a US jury in a NY federal court ordered the Palestinian Authority (PA) & PLO to pay more than $218 million in damages for “providing material support to terrorists” for attacks in Jerusalem attributed to Hamas. The lawsuit was the work of Shurat Hadin & Nitsana Darshan-Leitner who have close ties to the Israeli government.

The censorship on FB is already a problem where they willingly play a part in the management of information available to people around the world. Corporate media has gotten away with murder for decades in how it reports or does not report news—especially about war, colonialism, racism, the war on the Black community, & occupation like in Palestine & Kashmir. Social media is disrupting the entire edifice of news reporting & control of information, shaking it at its very foundations.

An example would be that in reporting on this lawsuit against FB, it was said that Hamas “overran” Gaza in 2007 when in fact, like it or not, they were elected by the people of Gaza. Media also reported that the lawsuit was filed after “scores of Palestinian attacks targeting Israeli civilians & troops” fueled by incitement on social media. If it were not for social media, that lying-assed narrative would prevail around the world.

The fate of this lawsuit against FB is of great concern & cannot be left up to a US district court beholden to the powers-that-be—as we have seen in so many rulings including the previous Shurat Hadin lawsuit & the Bhopal ruling favoring Dow Chemical.

Those who value social media as a source of information & solidarity-building need to mobilize to oppose censorship on FB, as it stands now, & to prevent the US court from attempting to truncate freedom of speech even more on social media. We have a right under the US Bill of Rights to express our views, to exchange information, & to build solidarity without impediment.

Nothing shows the importance of controlling information more than the Indian lockdown on the internet & cell phones in Kashmir while soldiers go on a murderous rampage against unarmed & injured civilians. This is 8-year-old Mudasir, whose eye was damaged by pellet munitions used by the Indian army, waiting for treatment at a hospital. Most major media has not covered this rampage in any form. Only The Atlantic has shown photos of the barbarism being deployed.

That’s why social media must be protected as a democratic forum. That’s why we must mobilize to protect it from censorship & to demand FB stop removing our posts & locking us out for speaking the truth.