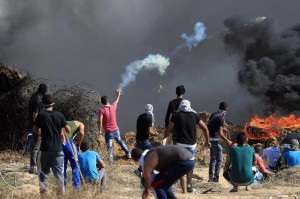 This post is from November 28th, 2015 & gives background on the Shurat Hadin lawsuit against Facebook. Micah Lakin Avni is a central figure in the suit, often quoted by media:

PBS did a segment last Tuesday titled “Why 20,000 Israelis are suing Facebook over Palestinian attacks.” Other than the Zionist & right-wing Dysentery magazine (also called Commentary), the first three minutes rank among the most dishonest pieces of journalism about the current Israeli pogrom against Palestinians.

The segment was framed around the October 13th stabbing death of Richard Lakin, a 76-year-old Israeli on a Jerusalem bus–allegedly by a Palestinian youth. In umpteen articles we learn Lakin, who moved from the US to Israel as a settler at the age of 45, was a grandfather, retired elementary school principal who was once active in the US civil rights movement, wrote a book about kindness in the classroom, & worked for peaceful coexistence between Israelis & Palestinians. Sounds like a fine fellow indeed–despite his Zionist & colonial ideology.

PBS interviewed Micah Avni, the son of Lakin, who said he began searching the internet struggling to understand what would incite young Palestinians to gruesomely stab old men. This is where you wonder how such a prince among men raised such a bold-faced liar.

Avni claims he found thousands of sites on FB, Twitter, YouTube inciting Palestinians to stabbing & other violent acts against Israelis & Jews including instructional videos showing how to skewer them to death. Avni is shown looking at the site “Cyber & Jihad Lab,” a project of the notoriously disreputable Middle East Media Research Institute (MEMRI) which identifies these sites. MEMRI is an Israeli propaganda front group with non-profit status from the US government–part of the largesse of US support for Israeli apartheid. It is repeatedly accused of selectively translating & mistranslating from Arabic to make Palestinians & Muslims look violent.

But Avni’s lies don’t begin there. He didn’t just sign on to the class action lawsuit against FB after his father’s murder. He’s been involved with promoting it for a long time & has also been campaigning in the Knesset for regulation (i.e., abridging freedom of speech) of social media under the guise of prohibiting incitement to violence–as though it were really a major problem among Palestinians.The family added Lakin as a chief litigant in the suit–exploiting his death to make a shabby case compelling.

PBS producers know all that. To peddle this stinking kettle of fish as journalism, the PBS segment cited the Israeli Foreign Ministry as their source that as of October 1st there were 70 Israeli targets for the “kitchen knife Intifada.” They claimed 21 Israelis were killed & 184 wounded–“the vast majority by stabbing”–by Palestinian assailants as young as 12 & 13. They added (almost parenthetically) that 86 Palestinians were killed, “shot during or after carrying out attacks or in clashes with Israeli forces.” Interesting that those figures don’t agree with a single other media report where only 11 Israelis are reported killed by stabbing & nothing approximating that number of wounded.

The rest of the segment was interviews with Noura Erakat, a Palestinian-American who was dismissive of this rubbish & pointed out that FB has many sites inciting against Palestinians & which cheered on ethnic cleansing in Gaza in 2014. There was also an interview with legal scholar Jonathan Turley on the danger of abridging free speech & free association.

There is no problem on social media worth a lawsuit. The lawsuit is part of the gangster tactics used by the Israeli law firm Shurat HaDin which won a suit in a New York court against the Palestinian Authority for inciting terrorism & is now targeting BDS groups around the world. Shurat HaDin, which has ties to Israeli national security, uses methods taught to its director Nitsana Darshan-Leitner by the Southern Poverty Law Center (SPLC). The intent is to tie up resources & bankrupt political opponents. It’s an association the SPLC has yet to account for.

The lawsuit intends to force FB to set up its algorithms to identify & remove material & to prevent “violent-minded Palestinians” from connecting with each other. Let’s get real here. There isn’t enough such material to warrant a class action lawsuit. The intent is to silence the voices of Palestinians, obstruct the growth of BDS & Palestinian solidarity under the guise of ending a “stabbing Intifada” & a “FB Intifada.” Free speech, freedom of association, & justice for Palestinians is what is at stake.

This photo shows the real relationship of forces: unarmed Palestinians against one of the most ruthless & well-armed military forces in the world.